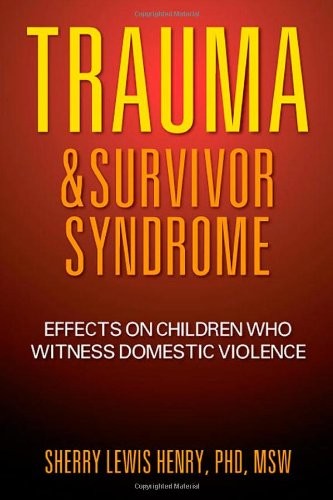 Most people are aware of the Jewish Holocaust, the German concentration camps and the slaughter of thirteen million people. At the conclusion of World War II, many of the survivors of the camps came to New York, where physicians and psychiatrists worked with them to transition back to normalcy. These patients all shared symptoms, new to the medical field at the time, broadly called "Survivor Syndrome" and explained in the book, Massive Psychic Trauma, edited by Dr. Henry Krystal, NY, 1968. Twenty years later, Survivor Syndrome began to be associated with the symptoms of domestic violence within the home. TRAUMA & Survivor Syndrome explains these specific symptoms, differentiates them from post-traumatic-stress-disorder symptoms, and gives a case study of a child-witness to domestic violence who later, under unique circumstances, presented with the symptoms of "Survivor Syndrome." Survivor Syndrome material derived from Dr. Henry Krystal's "Massive Psychic Trauma," 1968. About the Author: Sherry Lewis Henry PhD, MSW is a retired clinical social worker. She was motivated to write TRAUMA & Survivor Syndrome by the desire and need to investigate her mother's murder, despite the obvious cover-up. Seeking for Truth became a healing journey, which led her to Israel. There, among Holocaust survivors and their progeny, she found peers, validation, and existential restoration. Dr. Viktor Frankl's words rang true, "The Survivor's Mission is twofold; healing of man-made, deliberate trauma for others and oneself is an on-going, life-long quest." "It Is Good To Be a Seeker, but sooner or later a Seeker must give that which he has found,unto the world, to whomever will receive it." (Richard Bach, Jonathan Livingston Seagull)TRAUMA & Survivor Syndrome is that Gift. Publisher's website: http://sbpra.com/SherryLewisHenry

I was so sad to hear about the Virginia incident. I do not want to speak too much about the person who murdered other before he took his own life because i assume there is going to be quite a lot of information about his past that come about. I assume there are a lot of factors that would